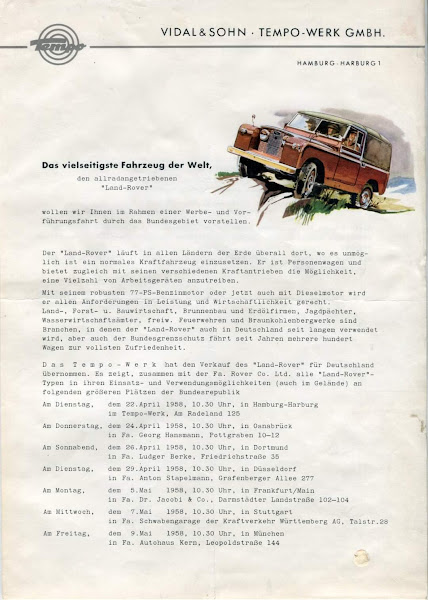 As the Vidal and Son's Tempowerkes in Hamburg-Harburg fell in the British occupation zone, the company managed to secure a number of lucrative contracts with British companies. One of the most important was a contract to build British Land-Rovers for British forces in Germany and the Federal Government of West Germany. After completing that project, Tempo shopped the Land-Rover around as a general light commercial. This brochure outlines a promotional exhibition tour through West Germany in 1958.

"We want to introduce you to the most versatile vehicle in the world, the all-wheel drive "Land Rover" through a promotional and demonstration trip through Germany.

The "Land-Rover" operates in all countries of the world where it is impossible to use a normal motor vehicle. It is both a passenger car and at the same time, with its various drive options, offers the possibility of performing a large number of commercial roles.

With its robust 77 HP petrol engine (or now also with a diesel engine), it meets all requirements in terms of performance and economy.

For use in agriculture, forestry and construction – construction companies, oil companies, hunting tenants, water management offices, voluntary Fire brigades and lignite mines are among the industries which have been using the “Land-Rover” for a long time in Germany. Additionally, the Federal Border Guard have also been driving several hundred vehicles to the fullest satisfaction for years.

The Tempo factory has taken over the sale of the "Land-Rover" for Germany. We wish to demonstrate, together with Rover Co. Ltd. all "Land-Rover" types in their application and possible uses (including off-road) in the following locations in the Federal Republic

Paul Markham
I am a project manager in sunny Perth, Western Australia with an unhealthy interest in vintage motor scooters, travel and ancient history.